Available only through Allocation 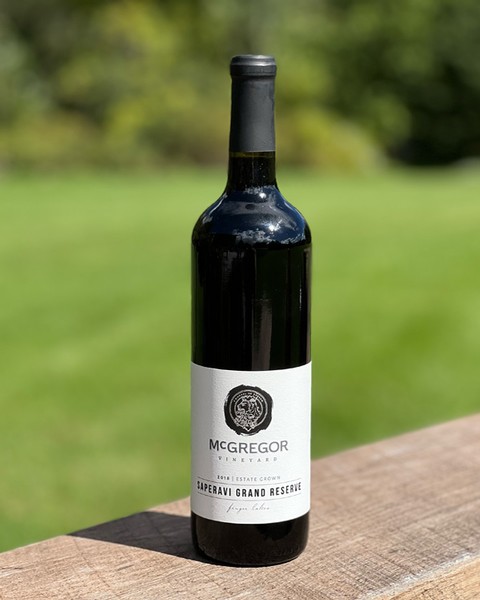 $80 per bottle retail price - receive 20% off by purchasing now. This Allocation opportunity ends on December 12th…place your order today!

McGregor Vineyard Saperavi: America's first Saperavi. This alluring wine has aromas of plum, blackberry, and crisp fall leaves. It's soft on the palate and has flavors of bright red berries, cherries, raspberries, black raspberry and cassis. These fruit flavors are balanced with smoke, spice, and earth tones. This deep and soulful wine lingers nicely on the palate. Enjoy now by decanting for a few hours or cellar easily for the next 5-15 years.

This wine allocation is available to you for a limited time. To access this allocation, log in with your McGregor Wine Club account, join our Wine Club online, or add yourself to the allocation waitlist. We will offer this allocation to as many folks on the waitlist as possible, but first come, first served!

Order now and receive 20% off the $80 retail price! Your order is shipped as soon as you place your order, or ready for pickup immediately. Buying wine through this program also entitles you first access to other future limited availability releases from McGregor Vineyard that are released in this way. Don’t miss out, place your order today!

McGregor Vineyard is the first winery in the United States to release a wine produced from the grape and called Saperavi. Bob McGregor recognized the early potential of this varietal and drove its development, creating demand across the Finger Lakes and the United States for this incredible new wine possibility.

1985: The McGregors release 1985 Saperavi - the very first Saperavi wine grown and produced in the United States

1991: The McGregors change the name of their Saperavi to Black Russian Red.

2018: The McGregors retire the name Black Russian Red and the wine is once again called Saperavi.

2022: McGregor Vineyard has a Wine Club only release of the first in their "Grand Reserve" style with 2017 Saperavi Grand Reserve - a true showcasing of the possibilities of Finger Lakes red winemaking. The Grand Reserve style is crafted by aging Saperavi in a selection of oak barrels for at least 3 years.

The 2018 Saperavi Grand Reserve is also released in 2022 through the introduction of the McGregor Vineyard Allocation Program.