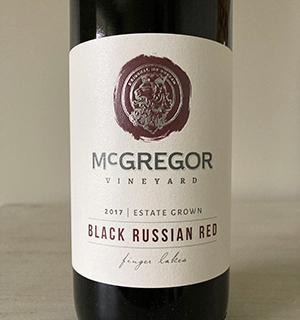 Winery founders Bob & Marge McGregor are pioneers of growing vinifera wine grapes in the northeast. In the 1970s Bob was searching for red varieties that could not only withstand the often brutal winter climate of the Finger Lakes, but were also disease resistant and able to consistently produce quality wine. In 1978, Dr. John McGrew of USDA in Beltsville, Maryland gave Bob scion wood of a number of grape varieties originally imported from Leningrad by Dr. Konstantin Frank in the late 1950s. Two of the varieties, Saperavi and Sereksiya Charni are what are now collectively known as “Black Russian Red.” We began planting these vines in the spring of 1980.

Saperavi is an ancient wine making grape (vitis vinifera) that is primarily grown and produced in the former Soviet Republic of Georgia. Georgians make a variety of Saperavi styles, ranging from wines meant to consume young to wine that matures for 50 or more years in the bottle.

There are only a few vineyards growing Saperavi in the United States, and until somewhat recently McGregor Vineyard was the only winery among them to produce this variety into a commercially sold wine. McGregor Vineyard has enjoyed a lot of success with this grape, and a handful of other Finger Lakes wineries are now themselves working with Saperavi. In recent years Saperavi has trended globally, being called "the black wine" by fans.

The Sereksiya Charni grape (vitis vinifera) is even more unusual than Saperavi and is grown around the Black and Caspian Seas in Ukraine, Armenia, and Romania. As far as we know we are the only producers of a wine from this variety in the Western Hemisphere.

Each of these varieties was produced and sold individually by McGregor Vineyard in the 1980s. However, Bob McGregor recognized that blending them together might produce an even more interesting wine than what they expressed individually. He was much happier with this new blend, and 1991 saw the very first vintage of Black Russian Red. Fewer than 100 cases were produced, which quickly sold out. The 1991 vintage is continuing to develop and even today remains a truly exquisite wine.

Today, the Black Russian Red is clearly a benchmark red wine of New York State, earing its status as the must-try cult favorite wine of the Finger Lakes. Recent vintages have expressed themselves as approachable in their youth, while improving with age over 8 or 10 to even 20+ years. We hope you agree that this intriguing wine is worthy of the attention it continues to garner and that you’ll share it with your wine-loving family and friends. 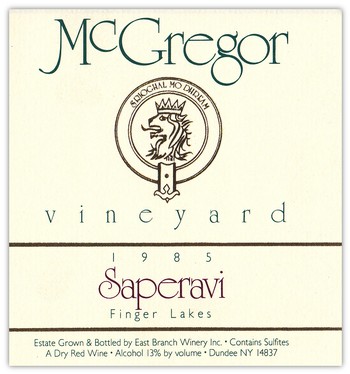